16 June 2016 – Yesterday we were up on the rim looking down 4000 ft to the valley floor.  Today we were hiking in the Yosemite valley floor looking 4000 ft up.  We took the highly rated Mist Trail which leads to 3 waterfalls.  However, we only had time (and energy) to reach the first set at Vernal Falls.

1.5 miles of 10 degree incline gaining 1000 ft is quite a challenge for little legs. Plus, we aren’t in full hiking shape this year.  After yesterday’s climb, I mistakenly thought the hike would be easier than it was.  I recorded 300 flights of stairs on my fitness tracker.
The park was not overly crowded but even on light days the valley floor can be overwhelmed.  We found parking to be something of a challenge but luckily only had to search for about 10 minutes.  However, it put us about .75 miles from the trailhead. 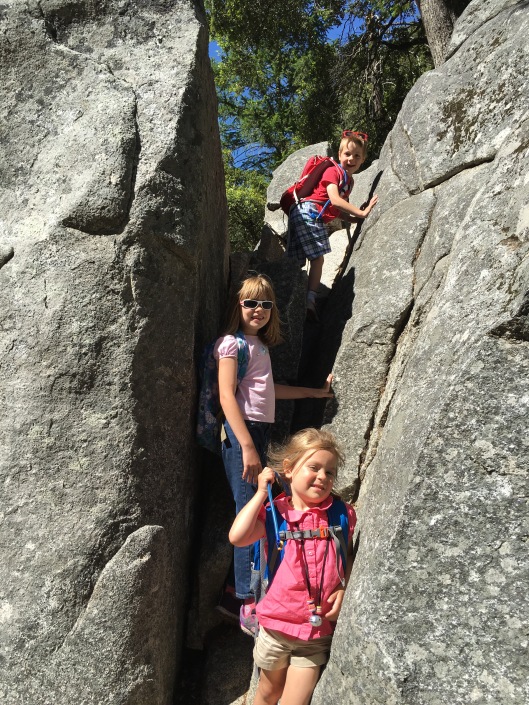 The kids found some granite boulders to climb along the path

The trail itself is paved and follows the path of the river which keeps it cool – but also increases the mosquito population as it nears evening. The trail is also really busy.  Too busy for our taste, but still – its Yosemite, so one cannot complain too much.

The kids had a bit of a rough go on the incline given a lack of sleep and the strenuous hike the previous day up the Panorama trail, especially Aurelia.  But we managed.  The primary portion of the trail ends at the Vernal Falls bridge, where you see the lower falls directly below you.  However, to see the more spectacular upper falls you have to go, that’s right, higher 🙂

Fat squirrel on the trail

We continued to the upper falls which were astounding – water falling from a straight-edged cliff making it look like a curtain.  The trail ends and one point and continues as a steep stairway cut into the granite along the river canyon.  You feel both the mist of the spray as well as the vibration of the falling water.  We went only a quarter way up the steps and  turned around to head back down.  It was just too much for the kids – and too much of a risk with them so tired.

We returned to our car at about 6:15.  The sun was going down and the 70 degree weather was more like 55 – so we put on our jackets and enjoyed dinner al fresco beneath half dome amongst the majesty of Yosemite. 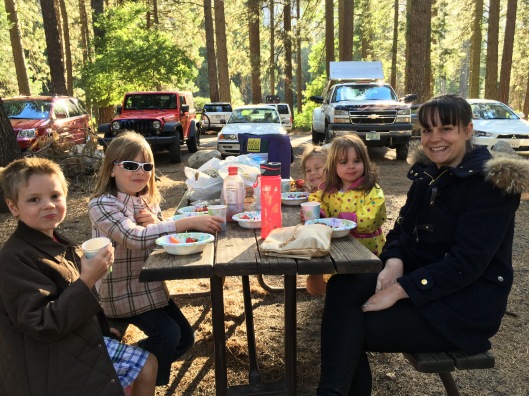 Dinner beneath half dome

On the way out of Yosemite, the park decided to give us one more treat – a beautiful view of half dome during the sunset.

15 June 2016 – Our first stop of the day was Mark Twain’s Cabin – it was on the way and we noticed the sign.  Not the original cabin, a recreation from the 1920’s on “Jackass Hill” where Twain stayed for little over 1 year.  It was there he wrote his famous short story about a jumping frog in Calavaras country.

We jumped out for a quick look and then continued on our way.  The kids took note because we’ve been listening to the short story and visited Angels Camp the day before.  It is a great gem of Americana and certainly a famous location for American literature.

We reached Yosemite at 12 noon.  Not a short drive from anywhere.  It was another 90 minutes (with lunch break) to Glacier point.  It is about .25 miles from the parking area to the lookout.  Luckily we found a parking space, others had another mile walk from a secondary parking lot.

You can see all of the major Yosemite sites: El Capitan, Half Dome, Yosemite river, and Yosemite falls.  The point is really crowded but the view is amazing and worth it.  Even better is the Panorama trail head which begins at Glacier point.

Family at Glacier Point – Half Dome in the background

From the trail the views are just as awesome but less crowded, a lot less crowded.  The hike goes over 8 miles to the valley floor 4000 feet below.  However, the hike is great at any distance and you can turn around at any point.  We went about 1.5 miles and then took a long rest to look over the valley before the calf-burning hike back up.  It took us a total of 3 hours and approximately 3 miles round trip.  We took a 10 minute rest and snack break half way through.

A rest and a snack on the panorama trail

Hiking on the Panorama Trail 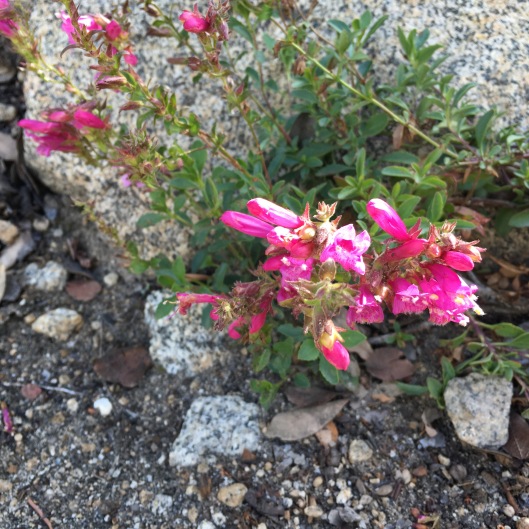 The kids had a great time, they always love hiking.  Giuliana slept in the kid carrier most of the way 🙂 The views were better than promised with both Half Dome and 3 waterfalls illuminated by the sun.  One of the most stunning views I’ve enjoyed on a hike.  Well worth it. It feels like the greatest cathedral in the universe. 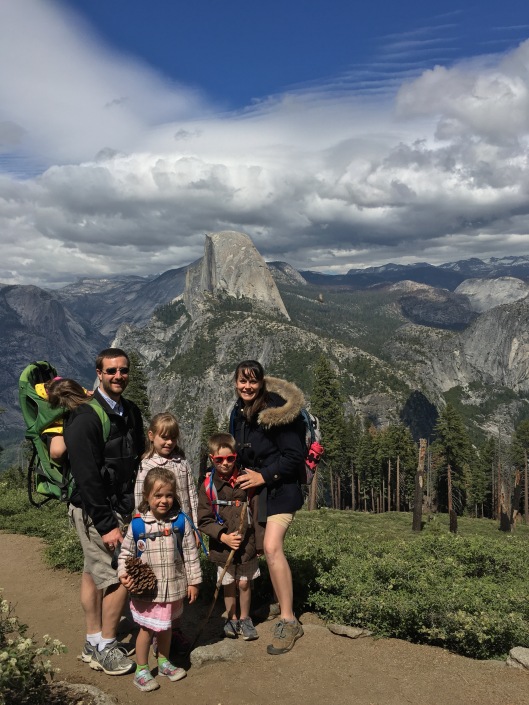 Family on the Panorama trail – half dome in the background, Giuliana sleeping on Sergio’s back

Half Dome and Waterfalls – the neverending view from the Panorama trail