While we booked the Coyote Valley RV Resort until 8 April, work was done early on the 7th and we decided to get an early start on the great Eastward march. Leaving Morgan Hill, CA we took about 4 hours to reach the Visalia/Sequoia National Park KOA in Visalia, CA.

From Visalia, CA we continued South East to Seligman, AZ (Route 66 KOA). Most of the day we spent parallel Route 66 and watching the ruins of the small towns once dotting the famous road pass us by on Interstate 40.  The panoramic vistas including multi-colored sandstone and gigantic rock monoliths were amazing, especially in the setting sun.

We got a small taste of the old Route 66 at our destination in Seligman, CA. The town still had several motels, curiosities, restaurants, and shops which made Route 66 famous. Seligman is also the supposed model for the Radiator Springs of Cars with real cars from the 30s, 40s, and 50s dotting the roadside and parking lots. 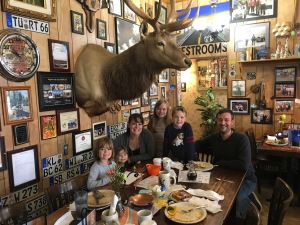 Breakfast at Lilo’s Westside Cafe on Route 66 in Seligman, AZ

On 10 April we left Seligman, AZ and traveled to Albuquerque, NM. We stopped for lunch and sightseeing at Meteor Crater, the largest confirmed and best-preserved meteor strike in the world. On the way we passed through Roswell, NM – the infamous site of a 1947 military weather balloon crash which led to stories of an alien craft crash landing and many conspiracy theories. It’s fun to drive through the two and see the green aliens everywhere. The town really owns and plays up the story and the kids had a great time spotting all of the aliens around town.

On 11 April we left Albuquerque, NM and drove into central Texas destined for San Angelo, TX.  Leaving Albuquerque we left behind amazing sandstone rock formations and hills and was quickly greeted by flat plains, amazingly red dirt, and countless oil and natural gas derricks constantly siphoning out that “black gold”/”Texas tea.”  The drive was the longest of the journey so far with over 450 miles and 12 hours.

12 April saw a short 4-hour drive from San Angelo in central Texas into San Antonio and Texas hill country.  We parked at San Antonio KOA, unhitched, and relaxed in the warmth of central Texas.  The kids immediately hit the pool and playground for some long-deserved play time.

13 April we spent the morning working and then went to San Antonio to visit the Alamo and the Riverwalk.

Read more about our visit to San Antonio. 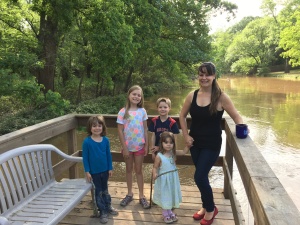 After two nights in San Antonio – a brief but welcome respite from the road – we were off to Louisiana.

We stopped over in Breaux Bridge, LA on the Teche Bayou in Pioneer Acadian Village.  We woke up and took a short walk to the Bayou which was at the end of the RV park.  There was a small pier into the river and gave us our first close-up view of the Bayou.

Sherrie spotted a crawfish trap and lifted it up with a stick only to find two crawfish, a frog, and a congo eel in the trap.  She freaked out and thought it was a cottonmouth snake – but the small feet on the side of the animal identified it as not a snake. 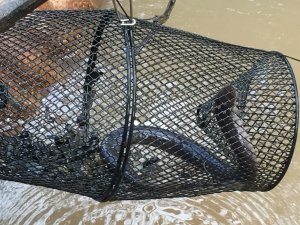 From Breaux Bridge, LA on 15 April we traveled the final 2 hours into New Orleans giving us our first glimpse of the Mississippi River and several riverboats along the Baton Rouge port.