11 May 2015 – While at the beach we noticed small rodent-like creatures in the bushes and running between trees.  They looked very odd, with features like a squirrel but the length of a cat.  Sherrie was the first to identify it as a mongoose.  With more research we found out that it is the Asian Mongoose and an invasive animal species present on the Hawaiian islands.

The creatures were not too afraid of humans – but not friendly enough to approach any.  They stayed in the bushes mostly and made quick sprints between trees.  They had a very beautiful brown coat and sleek bodies with a long bushy tail.  Unfortunately I didn’t have my better camera with us and so a “zoomed” shot from my cell phone and a short video clip (with some noises from Giuliana) will have to do 🙂 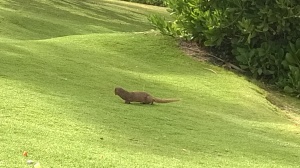 Asian Mongoose hunting for food at the beach

An Asian Mongoose hunting for food at the beach