15 May 2015 – We left early towards Pearl Harbor to visit the USS Missouri.  While we had seen the Arizona Memorial we had never visited the USS Missouri sitting right beside the sunken Arizona.

The battle of Pearl Harbor has always been personally significant as my grandfather was stationed on the carrier USS Enterprise at the time.  During the attack the USS Enterprise was out at sea and part of the critical protection of Hawaii after the attack.  However, if the Enterprise had not been out at sea that day and instead at port – I may not be here writing this post.

The tour begins with a bus ride out to Ford Island and a short walk to the Missouri where there they funnel all visitors past the commemorative photo opportunity.  However, they did get us with the sale of our photo in a magnet as we’re magnet collectors.

We only had 1.5 hours before we needed to leave to our next adventure that day – the Hawaiian Pirate Adventure.  We decided to follow-along with the 35 minute guided tour – which was very informative and worth the time.  The tour took us along the main deck discussing the history of the ship and various points of interest. 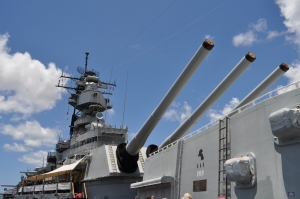 The guns and bridge of the USS Missouri

Lucas was very interested in the various deck guns along the rails.

The tour took us up to the surrender deck – the most historic point on the ship and one of the most historic events in US history.  I was surprised at the small size of the deck given the number of dignities and others present – as the tour guide pointed out, there was not much room for everyone.  There is a brass plate embedded in the deck where the table sat along with copies of the surrender documents to examine.  The table is now at the US Naval Academy in Annapolis – which Sherrie and I had seen before in our travels on the East Coast.

The location of the Japanese surrender of WWII

The tour led us further back to the stern of the ship to where the ship was struck by a kamikaze pilot and highlighted the burial at sea afforded the Japanese solider.  I felt both the tour guide and the other exhibits on board over-played the honorable actions of the ship’s crew towards the kamikaze pilot, including sewing a rising sun flag for the funeral.  I was thinking, of course that is what should happen, why brow beat us with that event?  But then on further reflection on the Japanese treatment of US POWs which was torture followed by execution, I saw that the purpose was to promote US values of treating POWs with respect and provide a historical counter-point to the Japanese position at that time.

We were also very lucky to witness a submarine being towed to sea out of Pearl Harbor which passed right near the USS Missouri.

A submarine being towed out of Pearl Harbor

After the tour we headed below decks and explored the maze of corridors and rooms which were very well documented.  The kids loved seeing the kitchens and the bunks.  They were also impressed by the Chief’s mess and lounge – with a television. 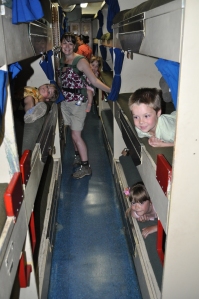 Aurelia, Lucas, and Isabella try out the bunks on the USS Missouri

Isabella, Aurelia, and Lucas at a bulkhead in the USS Missouri

Lucas, Isabella, Aurelia, Sherrie, and Giuliana exploring the corridors below deck on the USS Missouri

After a 20 minute walk below decks we headed up to the bridge.  The views are great from above but there was much less of the ship to see.  I noted the various compasses at multiple points and the bunker-like bridge surrounded by a circular steel wall almost a foot thick.  The kids exploring all of the instruments including the phones and radios. 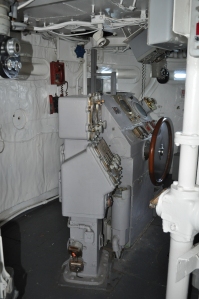 The bridge of the USS Missouri 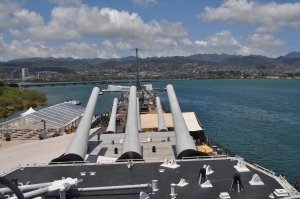 Lucas tries to use the phone on the USS Missouri

Isabella attempts to operate the radar on the USS Missouri

We then headed down from the bridge but not before a few more photo opportunities along the way.  Unusually, two different people offered to take our family picture – an offer we never refuse since it happens so rarely. 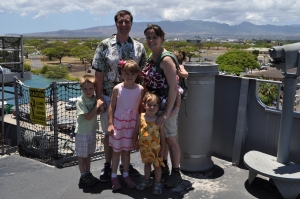 The family on the deck of the USS Missouri 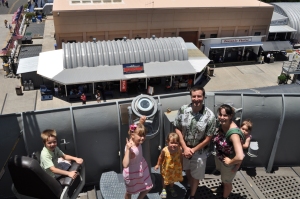 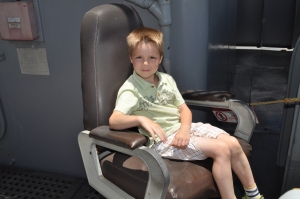 Lucas relaxes on the deck of the USS Missouri

The visit to the USS Missouri was excellent and the kids really enjoyed the experience and learned a lot about war, history, and how military ships operate.

A profile of the USS Missouri