14 May 2015 – Our friends generously offered to host our oldest three children at their house for a few hours while Sherrie and I went out.  The kids had a great time playing with the other children and visiting a splash park.

Meanwhile Sherrie and I went out into Honolulu to visit the best Aloha shirt store in the world – Bailey’s Antiques and Aloha Shirts.  Every time I visit Oahu I go to Baileys and pick up a few new shirts off their used racks.  They have over 15000 shirts dating back to the 1940s with both new and used.  The used are spectacular deals – usually costing less than $20.  Big name such as Tom Seleck, Jimmy Buffett, Nicolas Cage, and Anthony Bordain shop there for vintage shirts.  As usual, I chose more shirts than I intended, but the owner gave me a great discount on top of what I already consider a great price. 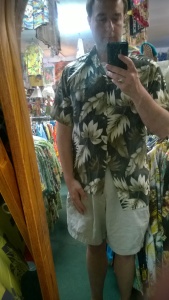 A new Aloha shirt for the wardrobe. Giuliana was napping in the car with Sherrie so I was snapping pictures for her evaluation 🙂

After updating my used Aloha shirt collection 🙂 we headed to a nearby Thai restaurant for lunch on the suggestion of friends – remember when I said Sherrie was always on the look-out for the next great Asian restaurant?  This time it was Siam Garden Café in Honolulu off Nimitz Hwy.

Giuliana and Sergio at lunch

With lunch over we picked up the kids and headed to the Paradise Cove Luau!  Due to traffic on the H1 we got there on time but a bit later than we wanted.

Paradise Cove is noted as being particularly child-friendly.  The program begins at 4:45 with activities such as spear-throwing, a ride around the cove in a canoe, flower-bracelet making, oil pencil tattoos, and pictures with parrots.

We hit the canoe riding first, then spear-throwing, and finally flowers and tattoos.  The kids loved the activities. 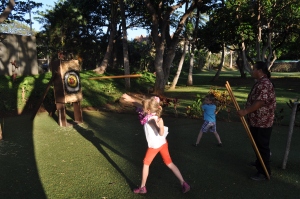 Lucas and his tattoo artist, Umi from Samoa. Lucas wanted a shark.

Lucas shows off his tattoo while the girls, Isabella, Aurelia, and Sherrie, show off their new flower bracelets.

Aurelia shows off her dolphin tattoo

Then the show began with the unearthing of the Kalua pork.  While the pork was prepared there was a short preview of hula and then off to get our seats for dinner – Sherrie went on an adventure to get drinks at the bar. 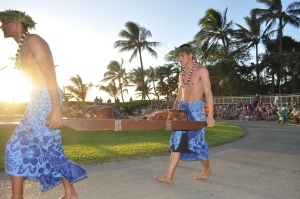 The kalua pork is unearthed and brought to the kitchen 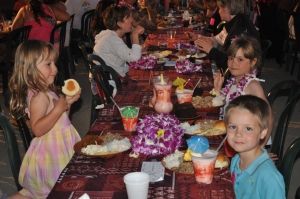 The show began right after dinner with dancing styles from Hawaii and Tahiti and the fire dancing – which the kids loved.  The kids even went on stage to learn the hula.

After the show Isabella wanted to visit with the cast members and Lucas wanted to ask Umi, the fire dancer, a question: how do you become a fire dancer.  Umi’s answer was, ” lots of practice – and ice water.”

Lucas and Isabella take an after-show photo with the cast