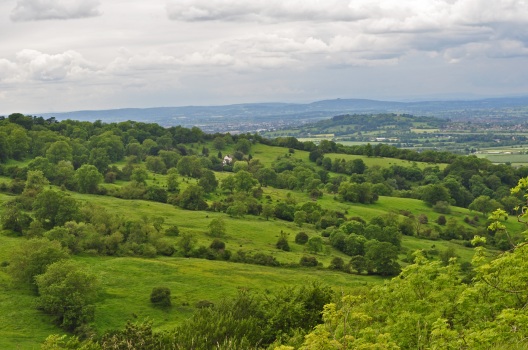 Last Sunday, the 10th of June, our family had the fortune (and good weather!) to embark on a fossil hunting expedition on Leckhampton Hill.  Sergio and I were inspired by a posting we read by the UK Fossils Network on the specimens located around Leckhampton.  We set off rather late, as I *had* to catch up on sleep, but we made it to the car park off Daisy Bank Road around 11:00 AM.  Picnic and trowels in tow, we set off for adventure!

Lucas was certain he’d find dinosaur bones and despite our explanations of the geological history of the UK and the oceanic nature of any likely fossil finds, he roared ahead with his dino-digging plans.  Can’t hardly blame the little guy – how cool would that be?!?!  We trudged a quarter-mile or so along a fairly steep grade (Standard Guage Incline, a nod to the lime quarrying past) before cresting the hill onto the ruins of an old kiln: site #1.

We found several examples of bivalves and brachiopods here.  The slope was easy to climb and yielded immediate, clear examples of fossilization in the jurassic period.  When we had our fill, we set out our picnic in the midst of the 1924 lime kiln ruins (click here to read a fantastic article written by the Gloucestershire Industrial Archeology Society in 2001 and to see a wonderful map of the area in which we were exploring along with a photograph of the lime kilns in action).  Totally awesome spot to have a picnic!  The sun brightly shone on the clearing and the temperature was in the upper 70s.  Perfect!

From there, we proceeded to head up the hill and followed the trail along the backs of some gorgeous Cotswold-stone farmhouses to the right, with Leckhampton Hill and Devil’s Chimney on our left.  We found another great outcropping shortly before the steep upward section to reach the Cotswold Way.  At this location, Sergio scored a really neat find: a fossilized starfish!  It was embedding in the rock, however, so we had to settle with pictures and leave it behind.  We found a few more bivalves and some possible plant fossils before we felt some sprinkles and headed back into the wood for shelter.

Just a few yards further down the trail, we reached the peak and met with the Cotswold Way.  The views were STUNNING and nearly beyond belief.  We could see large swaths of the Wye Valley, several neighboring towns, nearby geological features, and the area in which our new home is situated.  The kids loved playing in the grasses at the top of Leckhampton Hill and we snapped a few memorable photos.  Here are my favorites:<insert photo of kids and I, views from the top, and Cotswold Way sign>

We checked out Devil’s Chimney, a bit of a joke left behind by the local quarrymen when the site was operational.  A local legend states that the Devil used to sit atop Leckhampton Hill and hurl stones down at churchgoers each Sunday.  They turned the rocks against the Devil and trapped him beneath, leaving only the chimney from which only the smokes of hell are allowed to escape.  I think the first is a bit more plausible.

Our last scouting site was Deadman’s Quarry, which I have learned is a large Inferior Oolite quarry that houses both upper and lower Freestone rocks.  We saw a few minor fossils and enjoyed the far-reaching views.  With the view of the Cotswold Way overhead once more, we scrambled up the face of the quarry, picking over rocks and “look-at-this-ing” over various finds.  Isabella was beyond proud of herself for climbing up entirely on her own!

We enjoyed the views for while on top of Leckhampton Hill and scoured the top for remains of the iron-age fort and barrow.  There wasn’t much to see on the hill itself, but the view all around was spectacular!

As Aurelia had finally fallen asleep in the Ergo, Isabella *had* to fall down and *had* to unleash a blood-curdling scream right in Aurelia’s ear.  *Had* to.  Aurelia woke up and joined in Isabella’s cries and thus the girls signalled the end to our day’s adventures.  We stumbled along a few paths until we found one heading in the general direction of the Daisy Bank carpark and eventually found our way back to the van.

An absolutely stunning and memorable time was had by all and we have a neat collection of fossils (along with these great photos) by which we can recall our efforts.  I think Leckhampton Hill and fossil-hunting just might become our new go-to sunny day activity.  Who wants to go on our next adventure?